Because I receive more and more requests from abroad for the exhibition catalogue Black is beautiful, Rubens to Dumas from 2008, I will publish, again, some of my research and writings in this book. The book has become unaffordable on Amazon.

Today, 7-11-2019, is heroes’ day in the Netherlands. I don’t know exactly what that means, but it is a good reason for posts about heroes (see for new information below) .

! New insights: the title is problaby changed in black boxer or boxer. In 2008 it was known as the boxer Battling Siki? see below for new information.

‘The first black boxer to become truly famous in the Netherlands, was Battling Siki, a Senegalese who was married to a Rotterdam girl’ the Rotterdam European boxing champion Bep van Klaveren explained in 1989. Bep van Klaveren 1907 –1992 knew more about the life of Battling Siki 1897 –1925, including the details of a spectacular victory in 1921:‘The boy’d got it made. Because of him people began to say that negroes could box better than whites. […] Drew a big audience in those years, you know, a negro who boxed […]’. Van Klaveren also knew how Siki ended up: ‘He could really box, you know, oh yes […] Battling Siki went off to America then, but they beat him total loss over there. I saw him at work there once. Dear, oh dear, he was really laid into. He was on cocaine and someone from the drugs world stabbed him to death in America.’Israels painted this legendary world champion around 1914 –1915, in the present work which he called Negro boxer. Israels was a great fan of boxing which is one of the reasons why he painted Siki in action several times during his stay in London. This work shows Siki wearing boxing gloves, seated on a stool in the corner ring, during a break between rounds. The vague contours of the public can be discerned in the background.Everything is represented with brown and black brushstrokes. Siki’s body and face are a patchwork of light and dark brown which emphasises the light falling on his muscled body. The browns range in hue from yellow brown to red brown.

The entire painting expresses a brief moment of repose, shortly after and shortly before an explosion of energy. The boxer seems to be contemplating the continuation of the bout, although it is doubtful whether this was an actual fight: Anna Wagner believes that, to create his boxer paintings, Israёls hired a hall and invited an audience to watch.

Decorative artist Theo Nieuwenhuis 1866 –1951 visited Israels in London in 1915 and reported on these works in a letter to the artist Willem Witsen 1860 –1923. ‘[…] I. has made lovely things in London. Wrestlers, a negro and a white, magnificent in action and in nudity. That is your true nude study […]’.

Israёls certainly produced three oil paintings of Siki: one of the boxer against the ropes, one of him fighting a white opponent and the present work of Siki in a break between rounds. The first of these was printed in 1930 in the ‘Het grote negernummer / Negro number’ of De Groene Amsterdammer. The art critic Albert Plasschaert 1866 –1941 wrote in the accompanying article about black boxers:

‘They are the painters’ novelty, [being] both of a different colour, and of a different shade, and roundabout the highest light on their body different, and against an even blue, rich and new, and that is why painters are painting them now (their colour is essence after all) and while we are glad to see the images of the black in our collection, why that is a defeat for us; for in one respect they are still a rarity, but in another respect they are perhaps fate – that we may not fear, for then that fate becomes materialised and deserved […]’. He did not further clarify his rather enigmatic final statement. ES

New information: A French documentary maker contacted me because is currently making a film about Siki. He questions the fact that this man on the painting could be Battling Siki. 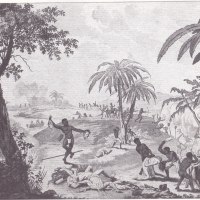