Slaves of Fashion New works by the Singh Twins.

This Exhibition is a collaboration between National Museums Liverpool, The Singh Twins and Professor Kate Marsh, University of Liverpool.

Slaves of Fashion explores the story of Indian textiles and its contemporary relevance. It reveals the beauty of Indian fabrics and the skills of those who made them. However it goes further: it also highlights the history and politics of global trade. A serie of Eleven symbolic portraits of historical figures represent different stories about India’s textile industry and hidden aspects as slavery, empire and the conflict with luxury lifestyle.

Coromandel: Sugar and Spice, Not so Nice.

Next to each work there is a detailed explanation of what can be seen. A summary of Coromandel:
‘Coromandel is a region on the south-east coast of India, renowned for the best Indian textiles. Initially, the Dutch controlled the lucrative spice market through trade in textiles from this area. By the late 17th century they were selling the cloth in Europe for use as furnishing and clothes.’ The Dutch woman in the artwork wears a coat of floral fabric from Coramandel. She stands in front of a spice tree, symbol of the Dutch trade in spices such as nutmeg, pepper and cloves. The tree takes the form of ‘Tree of Life’, a frequent motives in Indian furnishing fabric.

Hanging from the tree we see the shocking image of a tortured figure. The Dutch used the profits of their trade in Indian textiles to fund the use of enslaved people on their sugar plantations in South America.

Summary: ‘In this work, The Singh Twins represent the horror of the transatlantic slave trade and its legacies. Traders sailed from Europe to West Africa. The Indiennes of the title are cotton fabrics made in India for the French. In the 18th century merchants from the port of Nantes traded these for enslaved Africans.’

The Singh Twins depict the central female figure wearing these facics. At the top we can see the badge of the India Natal shipping line. After the abolition of slavery, this company brought workers from India to sugar plantations in South Africa.

Indigo: The Colour of India.

Summary : ‘This artwork tells the story of the indigo plant. It was used in India as a fabric dye for thousands of years. Blue dyes were once rare and valuable. Indigo was prized for its rich, deep shade and colour-fast qualities. The main figure is Mumtaz Mahal, wife of Emperor Shah Jehan. He built the Taj Mahal in her Memory in Agra. A detail of the artwork shows how indigo was traded for enslaved people. The Singh Twins expose the misery of Indian farmers forced to grow indigo by the British.  This reliance on indigo contributed to the Bengal famine of 1770, in which millions of people died.’

Other portraits by The Singh Twins on display

In the second part of the exhibition, examples of The Twins’ creative techniques are on display.

This exhibition is very interesting for everyone interested in history, fashion, India and Art. It is also a nice example of storytelling for exhibition makers. 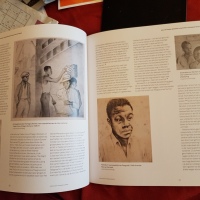 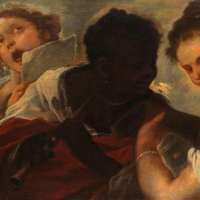 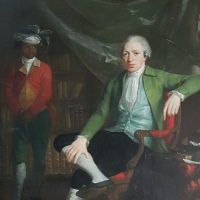 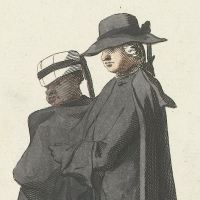